A A
To change the text size, hold down the Ctrl key and click + to increase or - to decrease it
Norsk English
Links Subscribe Contact
2021/06
Published reports Current investigations
Back to reports Print

Report on derailment between Løten and Hamar on 23 June 2020

On Tuesday 23 June 2020, one axle of a locomotive of the V4 type derailed at Hjellum between Løten and Hamar on the Rørosbanen line. This was the second time in two years that a locomotive of this type derailed during train operation. The derailment occurred due to a track fault consisting of both height misalignment and warping, in combination with the locomotive's running characteristics when travelling at maximum speed. This resulted in one of the axles being lifted off the rail.

Bane NOR SF had identified the height misalignment before the derailment, but the misalignment was not sufficiently severe to require immediate action. This means that track faults of this type exist in the rail network, and that all types of rolling stock are expected to be able to tackle them. When the same track fault reappears in the same place year after year, that is an indication that the way it is repaired does not provide a lasting solution to the problem.

The investigation into the derailment at Bryn in 2019 pointed to the stiff and nodding running of this type of rolling as highly unfavourable. The present investigation also emphasised this as a factor, and when operating at maximum speed, this could be exacerbated when the locomotive encounters height misalignment and warping of the track.

The NSIA submits one safety recommendation in which Grenland Rail AS is requested to conduct a risk assessment of the running characteristics of the rolling stock at different speeds. The purpose of such a risk assessment will be to clarify and determine whether the rolling stock has operating characteristics that should be taken into account in order to avoid future derailments. 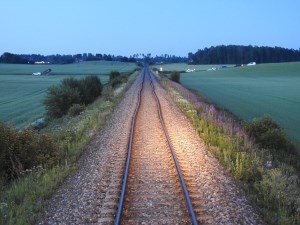 On Tuesday 23 June 2020, an uncoupled locomotive of the V4 type derailed between Hamar and Løten. The accident occurred when the locomotive passed a track fault consisting of both height misalignment and warping. This was the second derailment in two years involving this type of locomotive and similar track faults. The design of the locomotive results in running characteristics that make it vulnerable to this type of fault.

The Norwegian Safety Investigation Authority recommends that the Norwegian Railway Authority request Grenland Rail AS to conduct a risk assessment of the use of the V4 locomotive as regards its tolerance for height misalignments and warping.

Report on derailment between Løten and Hamar on 23 June 2020