A A
To change the text size, hold down the Ctrl key and click + to increase or - to decrease it
Norsk English
Links Subscribe Contact
2020/07
Published reports Current investigations
Back to reports Print

On Monday 26 August 2019, the driver lost control of a work train at the heritage railway line Setesdalsbanen, and the train rolled on for approx. 3.5 km before derailing at Grovane station.

The work train consisted of a Robel track maintenance vehicle and two freight cars. The work train was spraying a pesticide along the track, and was just north of the Kringsjå stop when the driver lost control of the train.

There was no handle on the door, and the driver tried to open the door using tools available on the track maintenance vehicle. While he was doing this, the vehicle’s gear shifted to the neutral position, and the train started to pick up speed rapidly. Most of the section of track from Kringsjå to Grovane is downhill, and the driver therefore chose to jump off the train at the Kringsjå stop. The driver suffered bruising, but no severe injuries. The train did not derail, but continued down to Grovane station and came to a stop in the gravel at the end of the track. The work train sustained minor damage.

The Norwegian Safety Investigation Authority does not propose any safety recommendations as a result of this incident. 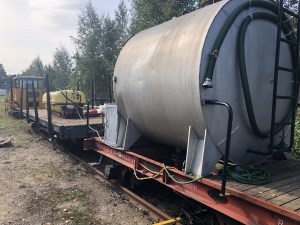 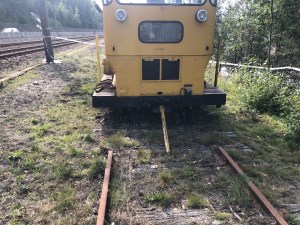 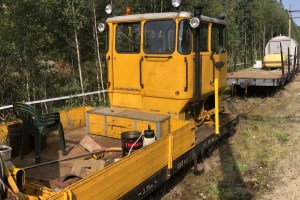