A A
To change the text size, hold down the Ctrl key and click + to increase or - to decrease it
Norsk English
Links Subscribe Contact
2020/01
Published reports Current investigations
Back to reports Print

On 16 January 2019, the driver of a light locomotive experienced brake force failure while approaching Roa station along a section of track with a steep downward gradient. As a result of the failure, the locomotive passed a stop signal at main approach signal D672 at Roa station at a speed of approx. 75 km/h. The brakes only started to take effect after the locomotive had entered the station area, and it came to a stop just before main departure signal M674 after having passed out of control through the station area.

The AIBN believes that the incident occurred as a result of the locomotive’s snow brake function, the purpose of which is to clear snow and ice from the brakes during the journey, being set at too low a frequency. The snowy weather on the day of the incident, in combination with the fact that manual braking was neither needed nor used on this stretch, probably contributed to a layer of ice gradually forming between the brake pads and the brake discs. This resulted in minimal friction when the train driver started braking. After the driver had applied the emergency brake, the locomotive travelled nearly two kilometres before stopping.

Winter problems related to rolling stock with disc brakes, and the importance of manual braking to prevent ice from building up, are well known in the industry and covered in the train drivers’ training. In the AIBN’s opinion, many drivers will trust the snow brake feature to prevent the build-up of ice, and it is therefore vital that it functions as intended. At the same time, the presence of such a brake feature cannot replace the need to check brake effect during a journey, particularly in unfavourable snow conditions.

In the AIBN’s opinion, this incident shows that a great responsibility for ensuring that the functions of rolling stock are appropriately set rests with the user. The Accident Investigation Board Norway therefore submits a safety recommendation concerning this issue to all railway undertakings that use rolling stock with some form of snow brake function controlled by a time mechanism. 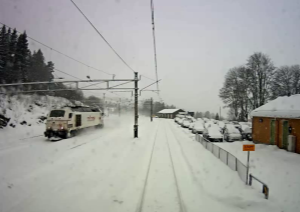 On 16 January 2019, a light locomotive passed a stop signal at main approach signal D672 at Roa station when the driver did not get the expected braking effect. It was snowing, and the driver had therefore activated the locomotive’s snow brake feature. Its effect was not sufficient to prevent the build-up of snow and ice between the brake pads and brake discs.

The Accident Investigation Board Norway requests that the Norwegian Railway Authority ensure that all railway undertakings make sure that vehicles equipped with a snow brake feature have appropriate settings adapted to the undertaking's activities.