A A
To change the text size, hold down the Ctrl key and click + to increase or - to decrease it
Norsk English
Links Subscribe Contact
2019/10
Published reports Current investigations
Back to reports Print

In the early hours of Monday 17 December 2018, a fire broke out and was followed by an explosion in a welding car containing gas cylinders in the metro tunnel between Ensjø and Helsfyr stations. Risk assessments carried out by Sporveien T-banen AS had not identified the risk of fire and explosion associated with placing gas cylinders near the welding car’s diesel generator. The AIBN submits one safety recommendation for Sporveien T-banen AS to strengthen its risk assessments of fire safety.

The vehicle contained equipment for welding work and was used by a team of three people welding rail joints. The team evacuated from the tunnel immediately upon detecting the fire, and no one was injured in the accident. The welding car was completely destroyed by the fire, and the heat and blast wave caused some damage to the infrastructure. The accident occurred at a time of night when the metro system is normally closed for maintenance and there are no passengers at the stations.

The investigation has found the likely cause of the fire to be an electrical short circuit in the vehicle’s diesel generator. A storage cage that contained cylinders of acetylene, propane and oxygen was placed next to the diesel generator. The fire service arrived within minutes of being notified, but since there was no danger to human life firefighters were not deployed to the scene due to the risk of explosion. About 40 minutes after the fire started, an acetylene cylinder ruptured and caused a strong blast wave. 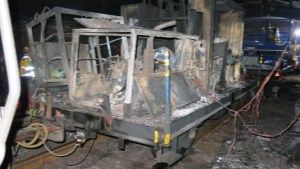 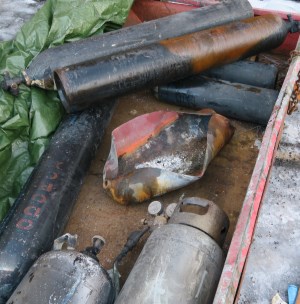 On Monday 17 December 2018 at approximately 03.00, a fire broke out and was followed by an explosion in a welding car containing gas cylinders in the metro tunnel between Ensjø and Helsfyr stations. Sporveien T-banen AS’s risk assessments did not address the dangers of placing gas cylinders next to potential ignition sources on the welding car.

The Accident Investigation Board Norway recommends that the Norwegian Railway Authority request Sporveien T-banen AS to strengthen its risk assessments to ensure that they include all use and storage of hazardous materials.