A A
To change the text size, hold down the Ctrl key and click + to increase or - to decrease it
Norsk English
Links Subscribe Contact
2019/09
Published reports Current investigations
Back to reports Print

On Thursday 29 November 2018, a lorry driver died in a collision with a passenger train on an unsecured level crossing on the Rørosbanen line. Bjøråneset level crossing was located between Atna and Koppang, on a private road near Atnaveien road that was open to public traffic. It was one of three crossings located a short distance from one another. Bane NOR SF had started planning to replace these three crossings with one crossing in a culvert, but the work had not yet commenced at the time of the accident. The level crossing is visible to the train driver at a distance of approx. 340 metres, but there is reason to believe that the train would be visible to the lorry driver leaning forward in a sitting position at a distance of 25 metres. The train sounded its sound signal more than 500 metres before the crossing, and it is uncertain whether the lorry driver could hear it. To the train driver, the lorry appeared to be standing still before the level crossing, but the investigation has shown that it was in fact driving at a very low speed.

The AIBN would like to draw attention to several important factors relating to safety at unsecured level crossings in this investigation.

The AIBN is of the opinion that particular attention should be paid to ensuring that the road leading up to a level crossing is sufficiently wide for a vehicle larger than the design requirement to be able to turn into an optimal position. If this is not possible, compensatory measures should be considered.

The AIBN proposes one safety recommendation based on this investigation. It concerns implementing measures in relation to unsecured level crossings where heavy vehicles have limited possibility of positioning themselves at a right angle to the railway line at level crossings.

The investigation touches on two transport sectors that may both benefit from the learning points that have emerged. The investigation has therefore been conducted jointly by the Road and Rail departments of the AIBN. 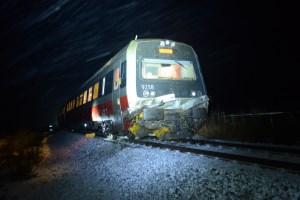 On Thursday 29 November 2018, a lorry driver died in a collision with a passenger train on an unsecured level crossing on the Rørosbanen line. This vehicle type's sight zones, in combination with the fact that the road and the railway were not perpendicular to each other, made it difficult to see the train. For such vehicles, even a slightly more acute angle between the railway tracks and the right side of the car will reduce the line of sight towards the tracks.

The Accident Investigation Board Norway recommends that the Norwegian Railway Authority request Bane NOR SF to implement measures in relation to unsecured level crossings where heavy vehicles have limited possibility of positioning themselves at a right angle to the railway line at the level crossing.