A A
To change the text size, hold down the Ctrl key and click + to increase or - to decrease it
Norsk English
Links Subscribe Contact
2019/08
Published reports Current investigations
Back to reports Print

On Sunday 21 October 2018, four special freight cars used to transport military material rolled out from the Auma branch line and onto the Rørosbanen line.

The freight cars rolled onto the Rørosbanen line on Sunday 21 October, some time between 10:30 and 11:00, causing the section of track to be identified as occupied. The traffic controller first attempted to release the track by issuing a ‘simulated train passage’ order in the remote control system. The section of track was still registered as occupied, giving indication of a technical fault. The traffic controller therefore had to give southbound regional train 2384 a verbal order to proceed from Tynset to Alvdal. When the train approached Auma, the train driver saw the freight cars on the main track. Because the train had been given an order to proceed with speed restrictions, there was never any danger of a collision.

Snow shields are often used in winter to protect the derailers from rain, snow and ice. A locally produced snow shield made of 3.3-mm-thick steel plates was used at Auma. The strength of the shield meant that, instead of being crushed, it was only deformed, serving as a guide rail guiding the first wheels over the derailer.

The Accident Investigation Board Norway (AIBN) proposes one safety recommendation. It concerns recommending traffic operators to strengthen their procedures to ensure that the brakes on freight cars are properly engaged when parked. 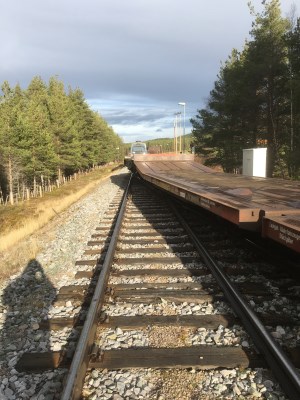 Both photos: Bane NOR SF

The Accident Investigation Board Norway recommends that the Norwegian Railway Authority request traffic operators to strengthen their procedures to ensure that the brakes on freight cars are properly engaged when parked.