A A
To change the text size, hold down the Ctrl key and click + to increase or - to decrease it
Norsk English
Links Subscribe Contact
2019/05
Published reports Current investigations
Back to reports Print

Report on unintended braking and forest fires between Sandermosen and Hakadal on the Gjøvik line, train 85811, 1 July 2018

On Sunday 1 July 2018, at approximately 19:45, Cargo Net AS train 85811 sparked several forest and shrub fires along a section of the Gjøvik line, approximately from kilometre post 12 between Kjelsås and Sandermosen to kilometre post 32 at Hakadal. The traffic controller notified the train driver, and the train was stopped and inspected at Hakadal station. The brakes turned out to have applied unintentionally on wagon number ten.

The train had been inspected and the brakes tested prior to departure from Alnabru. When the brakes were released during the brake test, the train’s pneumatic feed line was opened, which caused the brakes to re-apply. The feed line was found to have a major air leakage, and it was therefore closed. After that, the brake release system worked as normal. The brake test was completed and approved, and the train was reported to be ready for departure.

The wagon’s brakes were tested after the incident. On examination, the control valve that caused the unintended braking proved to have a leakage during filling that was difficult to locate. During the tests that followed, this control valve did not set the brakes as intended, but after several further tests, involving pressure reduction in the main line, the leakage stopped. On proceeding with the predefined test programme, the brakes appeared to be in normal working order.

After the brake tests, the control valve was removed and sent to Deutsche Bahn’s (DB) workshop in Fulda in Germany for further examination. The workshop did not find any fault that could explain the unintended braking or the functional failure that occurred during the brake tests carried out after the incident.

A chain mulching unit or a hammer knife mower is used to control vegetation. The fires that broke out show how important it is to regularly spray the ballast with herbicides and to clear the verges and banks of vegetation.

The Accident Investigation Board Norway (AIBN) proposes one safety recommendation. It addresses the need to consider whether additional tests are required in the event that irregularities arise during the brake tests of trains. 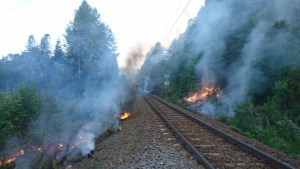 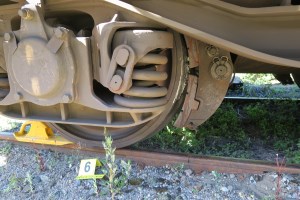 On 1 July 2018, train 85811 sparked several forest and shrub fires along the Gjøvik line between Sandermosen and Hakadal. When the train was stopped for inspection at Hakadal station, unintended braking was found in one of the freight wagons. The fires along the track were caused by heat and sparks that developed as a result of friction between the wheels and brake blocks. An irregularity had been observed during the pre-departure brake test. It was remedied, but not followed up by an additional test.

The Accident Investigation Board Norway recommends that the Norwegian Railway Authority propose that railway undertakings make sure they have procedures in place for carrying out additional tests in the event that irregularities arise during the brake test.

Report on unintended braking and forest fires between Sandermosen and Hakadal on the Gjøvik line, train 85811, 1 July 2018