A A
To change the text size, hold down the Ctrl key and click + to increase or - to decrease it
Norsk English
Links Subscribe Contact
2018/11
Published reports Current investigations
Back to reports Print

At 23.29 on Saturday 16 December 2017, the auxiliary pushing locomotive of timber train 8061 ran into the rearmost wagon. The locomotive was operated from the rearmost driver’s cab and was not coupled to the timber wagons. The collision was so powerful that parts of the timber load shifted and fell off the train. Several logs ended up on the platform and in the tracks at Grorud station in Oslo. A local train left Grorud shortly before the accident, and crossed the scene of the accident around 20 seconds before the collision. There were no people on the platform, and therefore the logs did not cause any personal injuries.

The collision occurred because the driver of the auxiliary locomotive did not have visual control of the distance to the train and lost track of the speed so that it became too high. In order to understand how this accident could occur, the Accident Investigation Board Norway (AINB) has looked more closely at the factors that contributed to the driver’s behaviour deviating in some aspects from the expected behaviour pattern. An increased stress level and disrupted sleep pattern have most likely had a negative impact on the driver’s assessment and behaviour in the situation in question.

Relevant regulatory frameworks and procedures, the traffic controller’s detection and alarm systems, and cargo securing when transporting short logs are also included in the investigation.

The AIBN submits one safety recommendation for railway undertakings to establish and comply with guidelines that systematically reduce the risk of a high stress level, drowsiness and fatigue leading to reduced safety in operations. 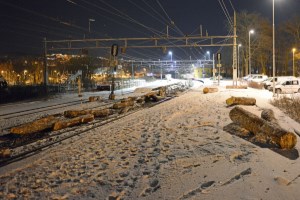 At 23.29 on Saturday 16 December 2017, timber train 8061 was driven with an uncoupled auxiliary locomotive from Alnabru towards Lørenskog. At Grorud station it ran into the rearmost wagon so that logs fell off several wagons and ended up on the platform and in the tracks. A high stress level due to technical problems and delays, in addition to a disrupted sleep pattern, most likely had a negative impact on assessment and behaviour in the situation in question.

The Accident Investigation Board Norway recommends that the Norwegian Railway Authority requests the railway undertakings to strengthen their safety management in order to identify increased risk of human errors in high-pressure operational situations.