A A
To change the text size, hold down the Ctrl key and click + to increase or - to decrease it
Norsk English
Links Subscribe Contact
2011/02
Notification Published reports Current investigations
Back to reports Print

At 05.45 on Tuesday 8 September 2009, the Monica IV and a buddy vessel left Egersund setting course for Skudeneshavn. They intended to troll for mackerel. There was one person on board each vessel. The voyage north was without incidents. When they arrived Kvitsøy around noon, the Monica IV chose to sail on the inside of the island while the buddy vessel sailed on the outside. The vessels had radio contact when they crossed the Skudenesfjord, but no problems were reported. At that point, the wind had increased to near gale force from the southeast, and the significant wave height was 2.0-2.5 metres. In addition there was a westerly swell.

From the shore, a small fishing vessel was observed approaching Skudeneshavn while rolling heavily. This was probably the Monica IV. The Accident Investigation Board Norway (AIBN) believes that the vessel capsized shortly after this observation was made, at some time between 12.51 and 12.55, in the area south of Skudenes that is renowned for its difficult wave conditions when the waves come from the southerly directions.

The vessel was subsequently observed drifting keel up southeast of Karmøy and a rescue operation was launched. The Monica IV drifted northwards and ended up in the Bekkjarvika inlet. Rescue workers were unable to get close due to high waves. Later that afternoon, a lifeless person was observed drifting away from the Monica IV. The missing fisherman was found dead on 11 September 2009 using a subsea ROV from the Coast Guard vessel Tor.

In accordance with its terms of reference, the AIBN has conducted a safety investigation to seek to determine the course of events and identify the underlying causes of the accident with a view to proposing safety recommendations to prevent the future recurrence of similar accidents.

The Monica IV probably capsized because of the impact of athwartship heeling moments from the sea in the form of waves against the vessel’s sides and/or water on the deck, combined with poor stability and small holes for drainage of water from the deck.

Calculations ordered by the AIBN show that, with the exception of the requirement for initial stability, in the condition she is assumed to have been in when she capsized, the Monica IV did not satisfy any of the stability requirements set out in the Nordic Boat Standard for Commercial Boats (NBS). The calculations also show that in this condition the vessel would have capsized with 4-5 centimetres of water on deck. The size of the drainage holes intended to clear the deck of water was 20% of the minimum NBS requirement.

The poor stability properties were a result of the vessel having been rigged with heavier fishing gear than the vessel’s built -in stability was designed to support. While the trolling rig on most vessels is made of aluminium, the rig on the Monica IV was partly made of stainless steel, which meant that the gear was heavier than usual. The fisherman, who was also the owner of the Monica IV, was considered to be a particularly responsible and safety-conscious person. He had constructed the trolling rig himself, and the AIBN assumes that stainless steel was used for reasons of strength. Despite extensive experience and a general focus on safety, he was probably unaware of the consequences for the vessel’s stabili ty of using such a heavy rig. The AIBN assumes that the fisherman’s understanding of stability may have been representative of many fishermen on board small vessels. It has been pointed out in Norwegian and international reports that the level of knowledge relating to stability is generally far too low among fishermen.

The investigation also found that the built-in stability of the vessel was poorer than that stated in the manufacturer’s technical documentation that accompanied the vessel. The calculations in the technical documentation were defective in that no inclining test of the vessel type had been carried out and the estimated lightship data was incorrect. In addition, the description of the hull shape on which the calculations were based was not in accordance with the actual shape of the cast hull. The vessel had furthermore under-sized drainage holes.

On the basis of preliminary investigations into the capsizing of the Monica IV, the AIBN issued a preliminary report on 4 December 2009, with a safety recommendation for owners of small fishing vessels to check the stability of their own vessels in connection with rigging of fishing gear. It was also recommended that the manufacturer Nor-Dan Båtbyggeri AS take corrective action to improve stability and increase the size of drainage holes in new and existing vessels of this type. Nor-Dan Båtbyggeri AS has followed up these recommendations in collaboration with Nordic Boat Trading AS, by entering into a dialogue with the owners of existing vessels. As far as newbuilds are concerned, both the Nor-Dan 32 and the Nor-Dan 35 now come with inclining test reports and stability calculations, and with drainage holes that meet the NBS requirements.

The AIBN proposes one safety recommendation in this report. It is addressed to the Norwegian Maritime Directorate and relates to the work on raising vessel owners/fishermen’s level of knowledge about how cargo and equipment affect the stability properties of a vessel and about how they can make sure that a vessel's stability is satisfactory under all loading conditions. 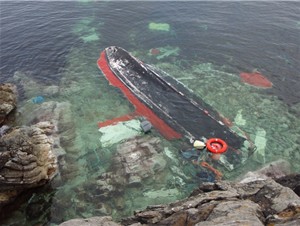