On Friday 25 September 2020, the Sikorsky Aircraft Corporation S-92A, LN-ONQ, operated by Bristow Norway was on its way back to Sola (ENZV) after a flight to the West Elara oil installation. During descent from 7 000 ft. towards 1 000 ft., at a height of approx. 4 500 ft. the crew received a caution that the oil pressure on the main gearbox had dropped below 45 psi. Shortly afterwards, the caution "INPUT / ACC # 1 HOT" came on. According to the emergency checklist, the crew pulled the left engine back to idle. When the oil pressure dropped further to below 35 psi, the oil cooler bypass was automatically switched on, as designed. During the further flight towards Sola, the oil temperature rose and the caution "INPUT / ACC # 2 HOT" came on. The highest recorded oil temperature before landing was 214 degrees C.

The crew declared mayday, and continued the descent to a height of 200 ft. They were preparing to land on the sea if the oil pressure were to disappear completely. The landing at Sola was undramatic and the helicopter was followed to standstill by the airport fire and rescue department.

The NSIA arrived at Sola the same evening, and started preliminary investigations.

The following findings were revealed:

There was some oil spill on the left engine and the left side of the main gearbox.

Oil was observed on the outside of the helicopter, especially on the left side of the fuselage.

The oil appeared to come from the left engine input to the main gearbox area.

There were no signs of leakage in the oil cooler or its hose connections.

The indicator that warns of a high pressure difference across the oil filter had come out. Initial visual inspection of the oil filter showed no particles. The filter will be further examined.

No metal particles were found on the main gearbox's magnetic plugs.

So far no explanation for the incident is determined.

The main gearbox has been removed from the helicopter, and will be sent to the manufacturer Sikorsky for further investigations. The investigations will take place under the auspices of the Norwegian Safety Investigation Authority with assistance from the American Accident Investigation Board NTSB.

The investigation of the main gearbox started at Sikorsky in USA on 20 October. Due to the Covid 19 situation, the Norwegian Safety Investigation Authority (NSIA) could not attend physically at the teardown. The National Transport Safety Board (NTSB) kindly accepted to participate on behalf of NSIA. The teardown was performed according to an agreed plan and it was coordinated and documented by the NTSB.

The teardown revealed a foreign object (FOD) in the form of a washer in the left-hand input module scavenge oil passageway. According to Sikorsky, the washer is of type MS2002-6, informed to be widely used in the main gearbox and associated areas. 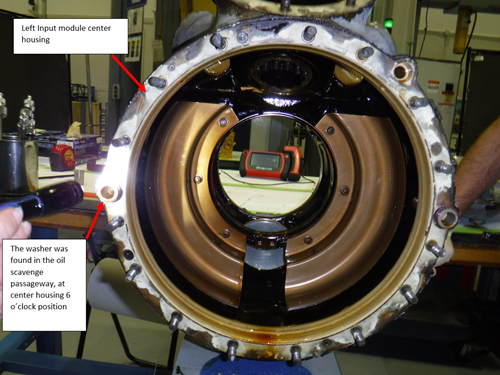 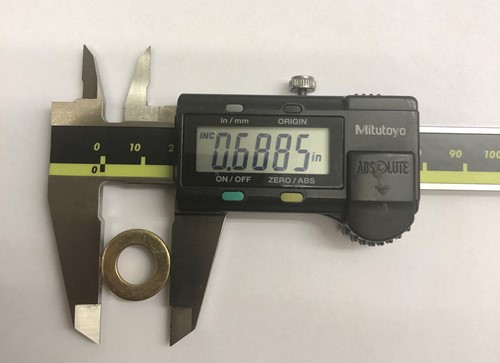 A new washer of type MS20002-6, like the one found in the left hand input module. Photo: Bristow Norway

The investigation continues and will among other issues attempt to determine when and how the washer entered into the main gearbox and, also how the washer have affected the oil system. At present, these are all open questions.

Both the washer and oil samples taken during the teardown are taken to the NTSB laboratory in Washington for further analysis in coordination between NTSB and NSIA.