On 16 November 2020 LN-OAX, an Airbus helicopters AS 350 B3, lost control during delivery of concret to a powermast fundament.

The aircraft was performing external load flights with delivering of concrete to a powerline fundament. During delivery of concrete to powerline mast number 49, the pilot experienced severe vertically vibrations. The pilot took immediate action, released the external load and was capable to manoeuvre the helicopter away from the construction area. During this operation the helicopter lost altitude and hit some threes. The helicopter stopped laying on the right-hand side about 33 meters from the construction area. No persons were seriously injured.

After initial inspection at the accident site the helicopter has been transported to the Norwegian Safety Investigation Authority's facilities in Lillestrøm, Norway for further examinations. 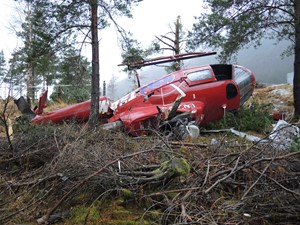 NSIA publishes a preliminary report to update on both factual information and the progress related to the aircraft accident.

The cause of vibrations is still unknown, and the investigation is ongoing. NSIA has removed the Vehicle and Engine Monitoring Display (VEMD) together with the Engine Digital Engine Control Unit (DECU) for read out by the Accident Investigation Board in France, Bureau d'enquêtes et d'analyses pour la sécurité de l'aviation civile (BEA). NSIA has inspected the helicopters flight controls, including servos but have not yet concluded about the result. The investigation continues with additional inspections and examinations.