A A
To change the text size, hold down the Ctrl key and click + to increase or - to decrease it
Norsk English
Links Subscribe Contact
Airbus Helicopters issues an Emergency Alert Service Bulletin following preliminary findings in connection with the investigation of the accident in Alta, Norway Saturday 31 August
Mandate Methodology Annual report Organisation News archive

The first detailed examinations of components from the Airbus Helicopters AS 350 B3E helicopter, LN-OFU brought to the AIBN premises was performed Tuesday. The work is in cooperation with the French Aviation Accident Investigation Bureau (BEA) with its technical advisors from Airbus Helicopters and the engine manufacturer Safran Helicopter Engines Preliminary findings linked to the connection between the engine and the main gearbox has lead AH to issue an Emergency Alert Service Bulletin (EASB) calling for immediate visual inspection of this area for recently delivered AS350, AS550 and EC130 helicopters. According to Airbus Helicopters, issuance of the EASB is a precautionary measure to ensure the continued airworthiness of the helicopter type.

The helicopter had less than 73 flight hours since new. The AIBN has no indication that the operator of the accident helicopter, Helitrans AS, has performed work other than visual inspection in the affected area.

The examinations of the accident helicopter is still ongoing. The AIBN has, at this stage, not concluded whether, or not, failure of the connection between the engine and the main gearbox is a causal factor. In order to obtain a complete understanding of the accident, the AIBN needs to hold together all information from the examined components, possible data from the storage unit, accident site observations, witness observations and testimonies from all parties involved in manufacture, maintenance and operations of the helicopter.

The memory chip from the helicopter’s data storage unit is still being examined. The memory chip had severe heath damage, even beyond the first impression. 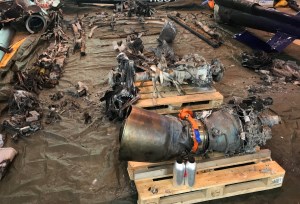 Components from LN-OFU laid out in the AIBN hangar. Photo: AIBN